If entered into the spirit of asking for invoices to the number of contributors, even because of a cafe, do not give the effort lost. Check your invoices and enhances the tax benefit.
Do not keep it to the IRS delivery period, either on paper or by the Net, the task of validating their invoices on the Portal of Finance, it will be too late – the deadline for validation ends on 15 February. And the longer delay, the greater the risk of being confronted with an endless list of outstanding invoices to validate, referring to the 12 months of 2015. This is a time consuming task, involving the verification of each individual invoice, and can become even more time-consuming if you have to repeat the same steps for other household members. It is that children also have invoices issued to the number of contributors – health and education, for example – and the need to validate the expenditure, one by one, also the covers. And there are families who still have to rely on other family members not used to dealing with new technologies. For these, the deductions are possible only if someone enter the e-invoice with your VAT number and password for the Portal of Finance and complement possibly missing information.

In addition, the portal e-efatura (https: // faturas.portaldasfinancas.gov.pt) is far from perfect and the degree of complexity of each menu may hinder its use by many taxpayers, even those who do not see the Internet as a big deal.

More: as with the Portal of Finance in the first months of the year, the possibility of encountering in February, with some congestion at the access to the e-invoice is too high, which could become even more time-consuming validation of all invoices of the family.

It is therefore necessary to initiate this process as soon as possible to have time to go clarifying, with the Finance Service, all doubts as they emerge throughout the year. Have us, however, come outpourings of consumers who obtained different responses in various branches of Finance, so it is likely that the very Tax Authority has not yet at this point to answer all questions. Alternatively, see the explanations that Finance will launching in the form of FAQs on the portal of e-invoice.

Still, if you can keep updated portal, will certainly save time and avoid last minute irritations. It is also true that if you do nothing or you can not properly complete the information of your invoices, no penalty will come from there. But some expenses are not deducted from the IRS and you will be wasting money. In fact, the correct communication invoices with VAT number can cost you hundreds of euros in deductions, which fatten an eventual refund or will be written off from tax payable.

All your deductions live there
Was to encourage the Portuguese to request invoice for all your expenses that the state had created the possibility of recovering in the tax declaration 2014, part of the VAT on expenditure on restaurants and accommodation, cosmetic services and hairdressing and repairs vehicles and motorcycles. It was enough that these invoices correctly appear released in e-invoice (https: //. Portaldasfinancas.gov.pt invoices), the issuer or by the taxpayer, so that the benefit was granted.

This year’s novelty is that almost all deductible expenses in IRS are centralized in this portal. Ie all invoices issued between January and December 2015 with your tax number should appear on e-invoice. Only thus will not be if the entity that issued not disclosed the information to the tax authorities. In this case, it is possible to manually enter invoices missing not to lose potential benefits. But do not rush: service providers have until the 25th of next month to launch the invoices, so it is normal not to find an invoice issued this month. Only after that date may consider that the invoice was not properly launched the portal and proceed by itself, to the record. To do this, look for the menu “register invoices”.

In addition, some entities have until late January to report to the Finance charges paid by the taxpayer. Here may be included user fees, tuition fees, the cost of homes and insurance.

Contrary to laziness and save the IRS
It is precisely to avoid wasting deductions in IRS should verify that the invoices you have requested has been duly reported to the tax authorities and if none are pending for want of further information. This can happen, for example, when a property sells various products and services. Just think of a supermarket. As making both may result from the purchase of food products such as health products, ends up pending. This is because the tax authorities can not identify the business sector to which it relates. Thus, the taxpayer remains confirm the portal e-bill in that context the expense was made. To help in the task, recreated in the bottom of pages, the steps to take.

Data from invoices submitted to the Treasury never contain the description of the goods purchased or services provided, compliance with the law on personal data protection. This can, however, complicate the recognition of some older costs that the taxpayer no longer has memory. Although the entity’s name that issued the document and your tax number appear on every invoice, it is possible that this is not enough, since many companies operate on a totally different brand of its designation for tax purposes. In such cases, the consumer may have to use a search engine to identify the entity that issued the invoice and consequently the type of expenditure.

E-making improved, efficient and easy to use
The wide range of new tax introduced this year in conjunction with a platform whose use requires some computer knowledge is being very penalizing for taxpayers. It has increased, along our Information Service, the number of requests for help related to the e-invoice. Many consumers fear can not declare all expenses this year at the IRS, and it is not difficult to predict that the months of January and February will be fertile in requests for clarification, with a corresponding increase in access to the e-invoice. It is not possible to create already a perfect system, providing all scenarios, the minimum required to the Tax Authority is to be very clear on the clarifications it provides and be responsive to all the difficulties that foresee the use of a new tool . It is also essential safeguard the possibility for consumers to manually fill some expenses, either through e-bill or tax return. This could solve cases such as school supplies, classified by e-invoice as an overhead rather than education. The year 2015 is coming to an end, without which the Portuguese are fully informed of the expenses that can be deducted, and in which category they can do. The longer have to wait for the Finance clarify all the questions? 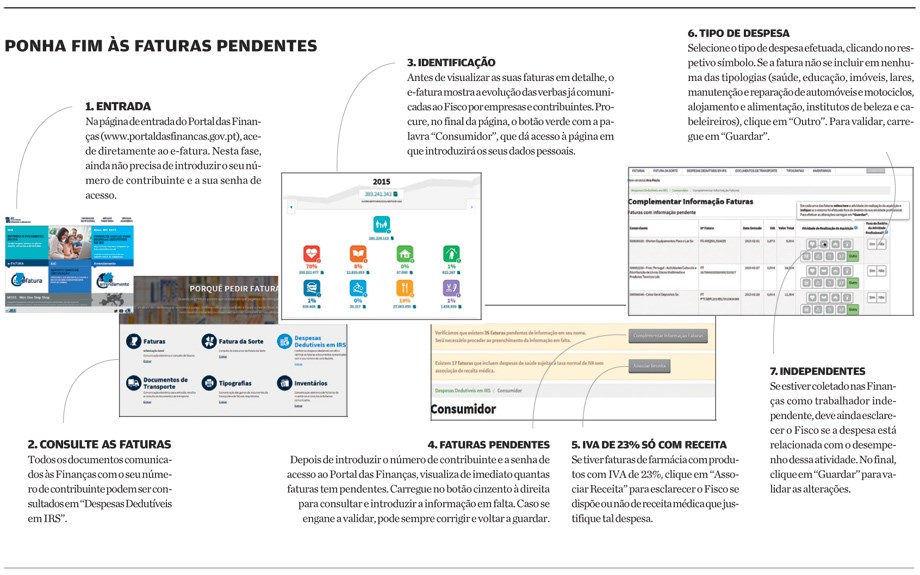 Health
Except for user fees and premiums of health insurance, which should be released in the first month of the year, it is expected that the majority of their health care costs is already inserted in the correct category of e-invoice. However, if any of them recognizes among its outstanding invoices, simply click on the symbol for health care spending – identical to the icon accompanying this text – to validate. If you purchased products with VAT rate of 23%, for example, a cream, it is likely that the bill appears on the portal as “pending”, waiting for the taxpayer to answer two questions: if you have a prescription and where the amount of the expense corresponding to this purchase with a prescription. This is because spending on goods taxed at 23% are only deductible in the IRS if prescribed by a doctor. The IRS considers 15% of all expenditure on health, regardless of whether or not exempted from VAT, up to 1000 euros. Those who have health insurance can get confused to see the e-invoice an expense supported in full, but it referred to its insurer to be partially reimbursed. Financial services recommend that taxpayers do nothing about these expenses. By the end of the year, insurance companies inform the tax authorities the amounts refunded to each taxpayer, in order to proceed to a fair reckoning.

Education
The beginning of the school year has brought many questions to taxpayers who wanted to make sure that all expenses related to the education of their children were properly inserted in the e-invoice and would be deducted from the IRS. In these cases, the IRS considers 30% of expenditure with a limit of 800 euros. The first doubts arose when books and supplies purchased in hypermarkets were not recognized by the IRS as education expenses. The all taxpayers in this situation we recommended that they should ask the invoice of school supplies separately from other purchases. It will thus be easier to identify this expense in the e-invoice and classify it correctly. But other questions continue to reach us without the Tax Authority can have an answer for them. This applies, for example, school meals bought to parishes or catering companies and taxpayers can not classify as education expenses are automatically included in the category of overheads. In such a situation is the school supplies and even specific to certain courses, such as musical instruments for students of conservatories. Also the fees paid in Portuguese universities are not, for now, visible in the e-invoice. But do not worry: the universities have until January to launch the e–fatura. As for tuition fees and student stays in European Union countries, Iceland, Liechtenstein and Norway, the only solution is to mention them when filling out the tax return.

General costs
Supermarket, travel, home appliances, furniture, water, electricity, gas, telecommunications, clothing, fuel … all charges that do not fit into any of the other categories are considered overhead. If you notice that has outstanding bills of this nature, just classify them as “Other”. And it is worth doing it? Yes. In the statement to deliver in 2016, the Treasury will deduct 35% of household overheads, up to EUR 250 per taxpayer with income. This deduction rises to 45%, with a limit of 335 euros in the case of single parents. However, in any case, the number of children does not increase the benefit limit.

Properties
They can only be classified as costs of the property interest paid in 2015 under credit agreements for permanent residence. However, this benefit can be enjoyed only by those who asked for the loan until December 31, 2011. In these cases, you can deduct 15% interest with a limit of 296 euros. Banks have until January 2016 to launch the amounts paid by customers this year, so it is natural to find anything at this point, the e-invoice. Also fall into this category rents for housing. Tenants can deduct 15% of up to 502 euros.

homes
For IRS purposes, the taxpayer and spouse expenses are accepted regardless of the amount of their income, relating to home care, nursing homes and senior citizens support institutions. The IRS also accepts expenses, but only in homes and institutions of support for the elderly, for the parents, grandparents, uncles, brothers or disabled dependents, provided they do not earn more than 505 euros per month. Each taxpayer can only use this deduction once every year. For example, having several children, only one of them may declare the expenses incurred with the father or the mother. You can deduct 25% of the amounts paid in 2015, with a limit of 403.75 euros.

IVA
As happened this year, the taxman returns to taxpayers 15% of the input IVA in catering and hospitality expenses, aesthetic services and hair salons, and auto repair and motorcycles, with a limit of 250 euros per household. The award of this benefit is automatic, ie does not require any fill in the tax return. But, like other bills, can optimize the value of the benefit to validate the outstanding invoices.

Do you need our services?

We are a Company of Excellence